upshotMK is a new freely-distributable weekly newsletter to share positive stories and news to the people of Milton Keynes during this challenging time!

If you have an elderly or vulnerable neighbour that is less tech-savvy, why not print a copy out and post it through their letterbox (take all sensible hygiene precautions whilst you do so!)

The PDF file will be downloadable from a number of places, but you can download all editions of the newsletter from this page here, so make sure you bookmark it! 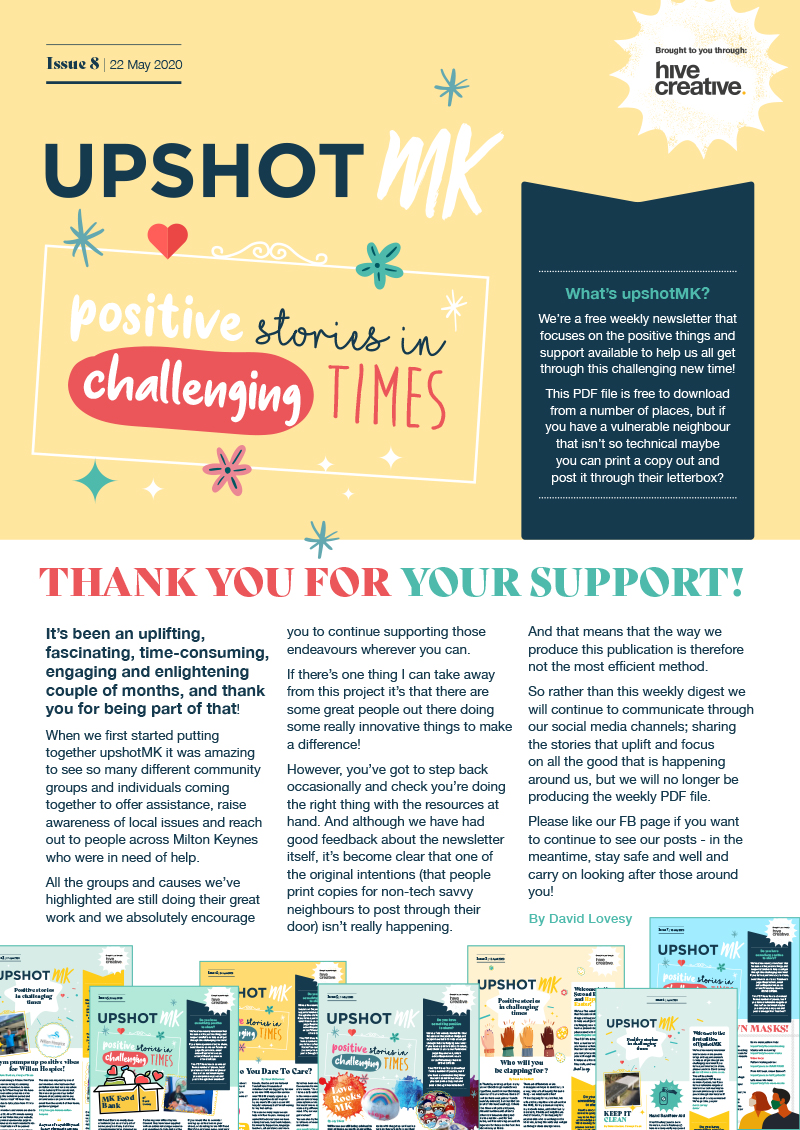 Here, in chronological order, is the story so far from our ongoing writing challenge! Think you can add to the tale? Entry details will be on the back page of the latest issue of upshotMK!

E Thomas, 10 April 2020
As the sun began to rise on another day, a sense of calm blanketed the land. The silence was temporarily fractured by a flurry of sparrows taking flight; like silhouetted dancers, they burst gracefully in to the crimson sky, as if signalling pursuit of the new dawn. A moment of peace. A landscape of beauty. Strangely though, this wasn’t John’s back garden and he had no idea how he ended up here.

C Dilnot, 17 April 2020
John took a cautious step into an unfamiliar atmosphere. The peaceful ambience of the gentle wind and the birds was quickly overturned by a fear of the unknown – what looked natural from a quick glance was vastly different when inspected up close. Random objects stood still, frozen in the air – as if gravity had all but forgotten them. A light touch would send them drifting gently through the air; the breeze offering little resistance. The shadows cast by the trees stood still even as the sun moved over the sky. Besides all living things, time stood still – motionless, as if it had been paused like a movie. John pushed a few leaves aside as he walked through the clearing he found himself in. Struggling to associate it with anything familiar, he looked backwards in hopes of seeing the house he’d just come from, but it was nowhere to be seen…

G Lovesy, 24 April 2020
It seemed like he entered a new land, a new place, a new… atmosphere. He walked amongst the frozen trees, immersing himself in the “forest”. It almost seemed lifeless, no birds were chirping, no leaves were rustling, no natural noise was made. It was… eerie. He felt himself get lost in the darker, more shaded area of the forest. It was cool and quiet, and that’s when he saw it – a pool of water, and yet… it didn’t look right. The water was too clear and the sides were too smooth. It was weirdly perfect. He walked up to the lake and dipped his toe in. It shone. No ripples of water came from it. Afterwards, he decided to pick it up with his bruised and swollen hands and sip the water like soup. He did so – he never would have expected what came next.

X Kanizsai, 1 May 2020
Suddenly, he felt himself falling, deep into the majestic lake which glistened in the sun. He opened his eyes. It was magical. An impossible dream came true. This little boy had reached an inter galactic home. A million times better than perfect. No, like… PARADISE! Subliminal messages sunk into his brain. The soft silky sand glided through his feet, the palm trees grew coconuts as big as you can imagine. His new home was an underwater cave! He was a merman! He turned around. Astonished, he calmly swam towards the moving object. It was his sister! She whispered,“Our time has come, we need to go back now.’’ They glided through the water, not making a sound. It was blackness. We were in the same old lake! But back at home. It’s nice to be back after a long time.

S Kommineni, 8 May 2020
As soon as they had come out of the water, they suddenly felt themselves turning back to normal. It was nearly midnight as they scrambled into their beds from the big oak tree that stood next to their rooms. As the birds began to sing their morning song, the two woke thinking that their magical adventure was just a wonderful dream. But they were quite wrong! After they had finished their morning chores, the two of them decided to take a dip in their outdoor swimming pool. It wasn’t minutes it was milliseconds they had formed tails and were whisked off into another land. Ocean paradise. They had not been dreaming it was real. They swam through coves and the most beautiful of reefs. But then what happened was of most bewilderment to the children. They had thought they were gone an hour, but they found it was much more…

D Pillai, 15 May 2020
The two children observed about them. Marine Bliss. Blotches of colour spread themselves out on the azure sea, glistening gently like a sapphire. Alice smiled. Immediately, Alice’s locket glowed softly, as a small bright current swirled gently out of it. With intense curiosity, the duo followed the current. The current stopped abruptly. The children were surprised to find the coral around them spinning faster and faster, into a large colourful whirlpool around them. “Look… behind you,” Jack yelled. Behind Alice was green monster slithering over her. “Give me the mermaid’s amulet!” the hideous creature bawled…

D Pillai, 22 May 2020
They were shifted to a new land. At the bottom of the sea’s murky depths. “Great, we are stuck in the bottom of the sea.” The current meekly came out of its hiding place within her locket. “What do think the monster meant by ‘Mermaid’s amulet’? This locket is simply a family heirloom,” Alice asked Jack as they looked around, “Do you t…” Jack began to ask Alice. But she wasn’t interested, she was occupied by the sight in front of her. “Now listen here, Diamond Gnomes,” shouted the commander in a gruff voice, “My advisor has failed to obtain the amulet from the girl. Whoever bears the amulet is the Emperor or Empress of the entire underwater kingdom. We may be blind but not defeated. WE WILL RULE THE KINDGOM!”. Alice limply pointed toward a door behind them, her face pearly-white, to find out she was the Empress of the ocean. The blue pearl’s safety was in her hands. 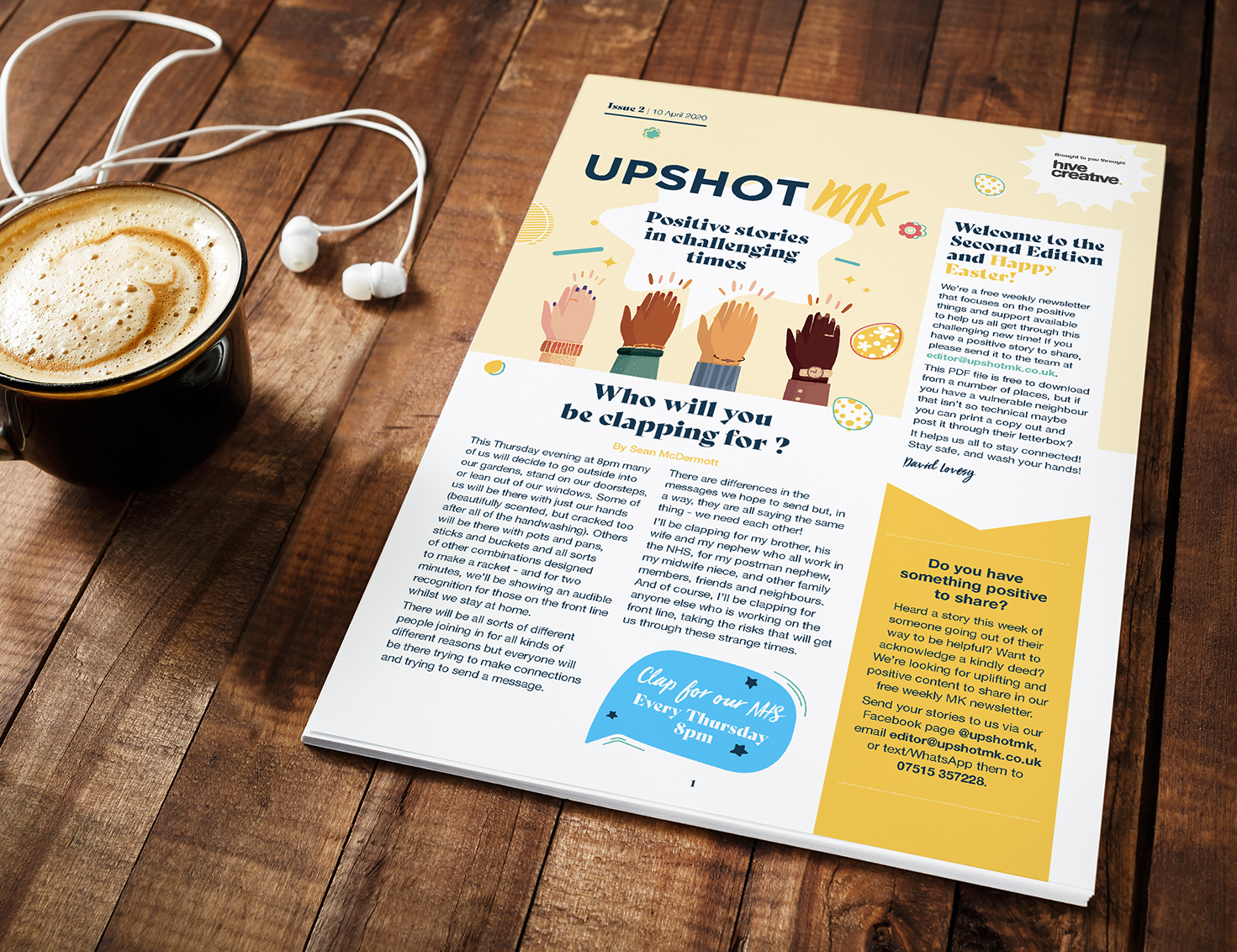 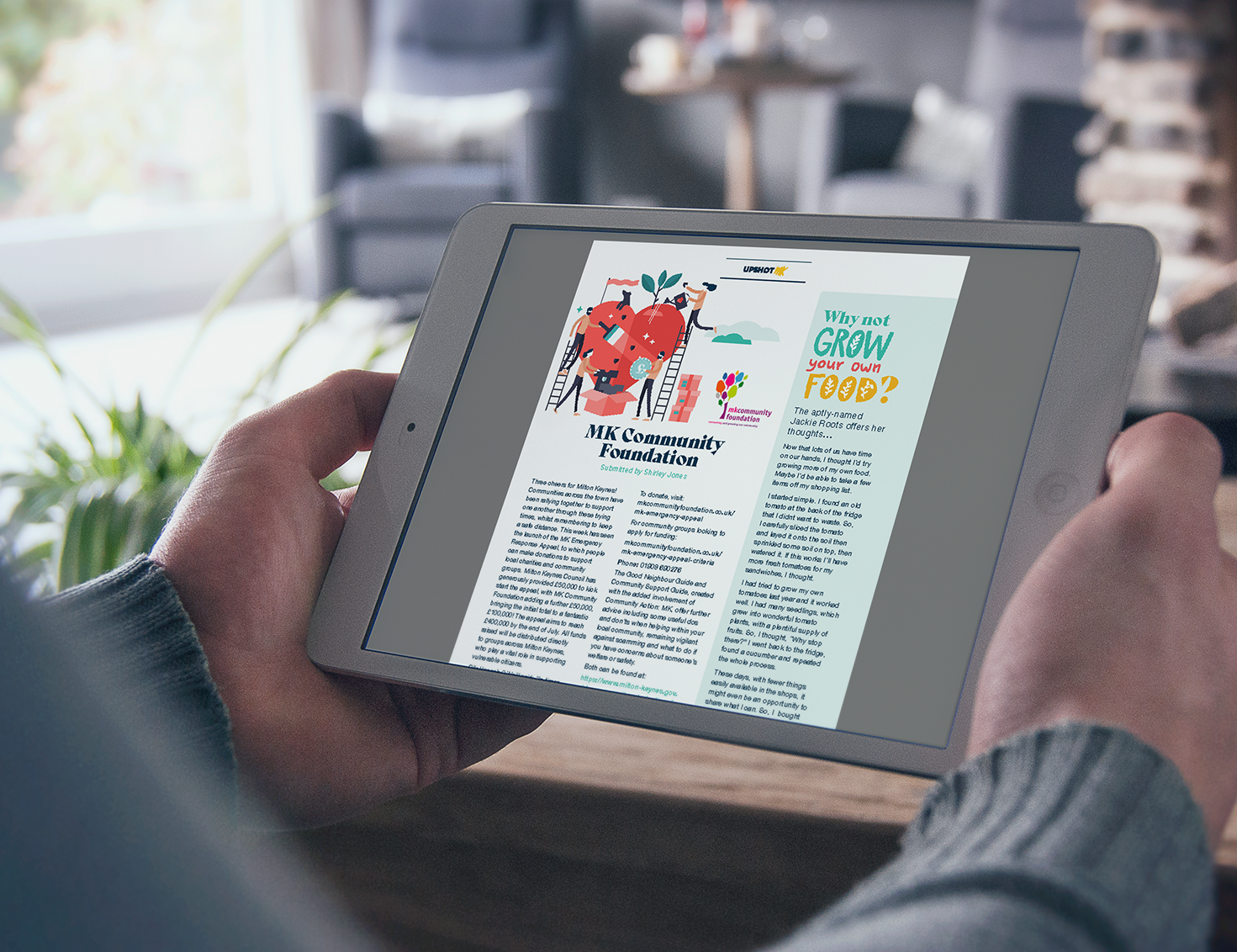 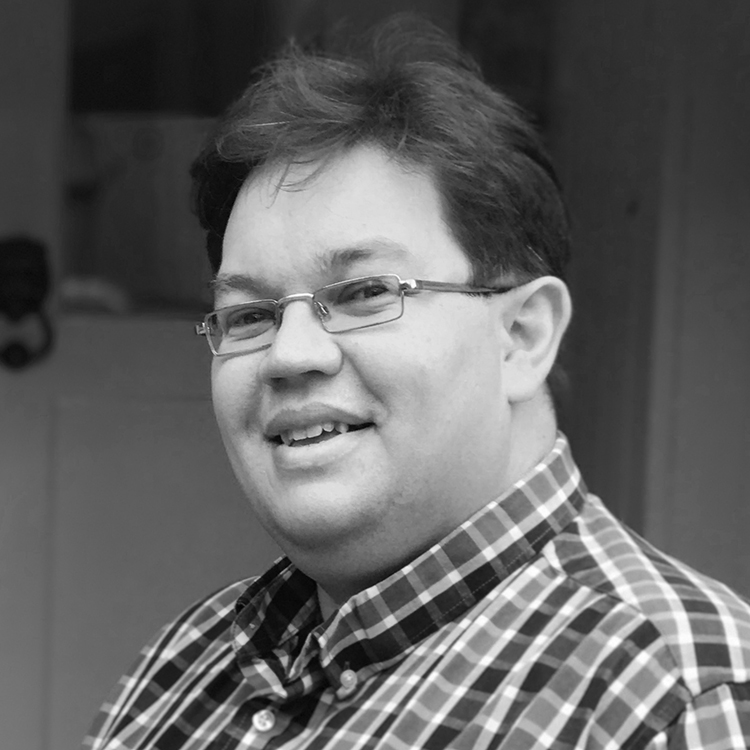 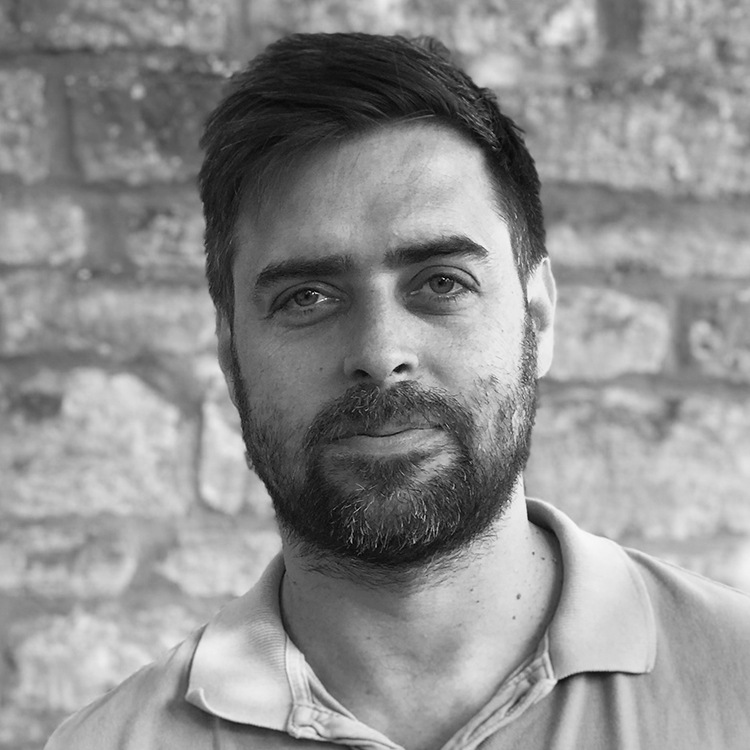 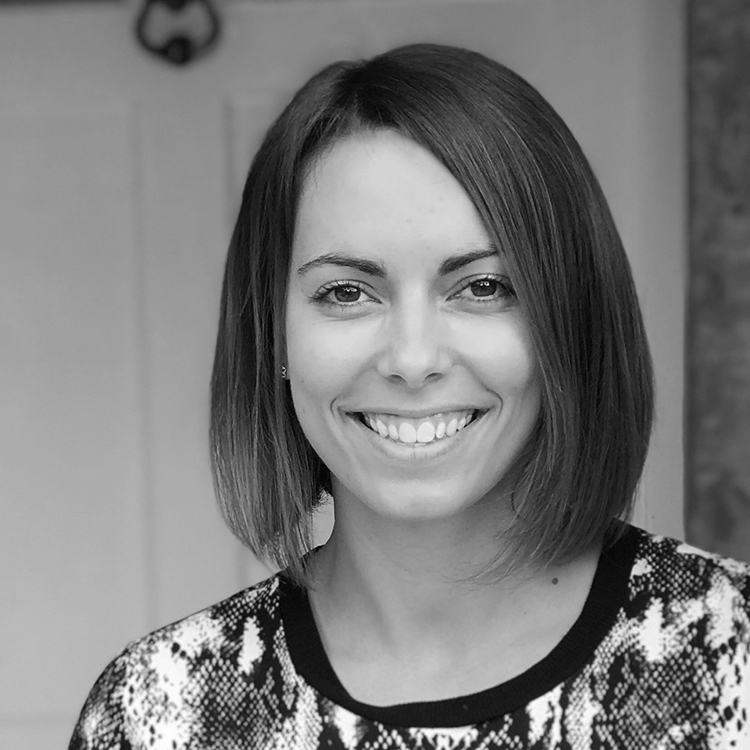